Every year the city gears up for the Taste of Chicago, an outdoor food festival showcasing the diversity of Chicago’s dining community. Besides showcasing food from all corners of the city, the Taste is complemented by music and other activities for the entire family. It’s a beautiful celebration that has happened annually in Grant Park since 1980, and while it’s a bit of a tourist trap (to put it lightly), this was my first time living in the city AND being a major foodie so I knew I had to at least stop by.

Zain and I arrived after work to a semi-crowded festival. That’s my first tip for Taste-goers: do not try to go on Saturday afternoon. I love food but I also love personal space and if you don’t want the person next to you breathing on your empanadas, go during the week.

Tickets aren’t cheap but they’re not absurdly priced either. They come in packs of 12 for $8.50, with “tastes” (or sample sizes) from each restaurant being anywhere from 3-5 tickets and meals being 6-10 or so. Zain and I each got two 12-packs and it ended up being the perfect amount.

We got a few “tastes” and a few star items, and left the festival feeling stuffed. We also heard AWOLNATION playing in the park next to the festival. That’s one of my favorite parts of Chicago – there’s no shortage of great entertainment, even when you’re just walking the street eating a turkey leg after work on a Wednesday. 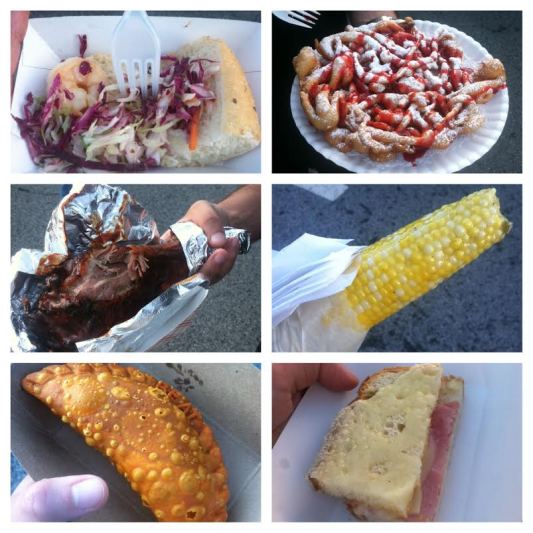 The Good: the grilled shrimp po boy, croque monsieur, and the corn on the cob

The Eh: bbq turkey leg and funnel cake (they smelled better than they tasted and not worth the $$)

What I wish I had tried:

That’s the thing about the Taste – you can’t possible try it all in one day (unless you’re a competitive eater). I left feeling stuffed out of my mind even though I’m sure if I sat down for a proper dinner I would have eaten more than I did here. It wouldn’t be a bad idea to go twice to really try a lot of options. It wasn’t a steal, as we ended up spending $34 for all the food you see above, and it’s difficult to use exactly the number of tickets you buy. We ended up giving our two leftover tickets to a homeless man collecting extras because you can’t really buy anything with two tickets. I’m sure at the end of the day he had enough for a decently sized meal which was a good feeling. Overall, it was a gorgeous 75 degree day filled with food sampling, music and good company, so how could I complain?

We ended the night taking a walk through Millennium Park just as a jazz band started playing. I’ll tell you what…this city has its problems but it has some gorgeous parks and great free activities.