It might seem like a cliche but there are few things in life scarier than taking a new path. When I say that, I’m speaking figuratively and literally.  For example, we all have those “routes” that get us home at the end of the day. That comfort level, that calmness we have being in control of how long it will take us to get home, is part of the everyday routine. Unfortunately, I think that we get too used to that comfort level and it translates into how we want to run our entire lives. It’s such a wonderful feeling to be in control that it becomes like a drug, and the minute you feel like you don’t have control it’s so easy to get anxious and worried.

In church we call it undo worry. I think it’s important to remember that this weird thing called LIFE was happening longgggg before we were born and sometimes it takes us in all different directions. Sometimes we itty bitty humans don’t really have much of a say in what happens. But that’s no cause for anger, self-harm, self-medication, or worry, no matter what form that could be. I think we all have different ways of handling life’s uncertainty, and while it’s something I’m still working on, I really admire those who turn to things like yoga, meditation or journaling. I’m quick to turn up the music full blast (in fact I just blew out my headphones the other day…whoops) because silence and solitary time just doesn’t work for me. I like noise, I like people, and I like “productivity”. It’s almost as if I believe that if I ignore or drown out my worries then they’ll go away. I’m starting to realize, however, that that’s not how life works! Dealing with your feelings, whether it be fear, worry, or even joy is something that needs to be proactively handled, not pushed under the surface until it comes out at an inopportune time.

I have doubts about where my future is. I have a little inkling about what path I want to go down but I can’t shake the feeling that it’s not the path I’m “supposed” to go down. Just as it’s scary to take a new path literally, it’s scary to imagine myself veering off my figurative plans. And while I can listen to as loud of music as I want and pound the pavement until I forget what I was even worried about, eventually I’m going to have to face this worry head-on. Eventually I’m going to have to have the courage to commit to a path, whatever that may be. No one minds an indecisive 23-year-old but I’m pretty sure this attitude won’t fly in few years 🙂

So how am I going to start taking a more proactive approach to my life? JOURNALING. I love to write (duh), but I especially love to hand-write. So I’m going to treat these next few months like a class, taking notes and studying them regularly, to see if I notice a pattern in my feelings or thoughts. I’m not sure when the final exam will be, but hopefully I’ll be prepared 😉

I’m also going to make a conscious effort to do things outside my comfort zone, make last-minute plans and take paths that I’m not used to, hoping that I can get used to not being in control all the time. I’ve actually been doing a great job of that lately and want to continue, because I’ve realized that sometimes the best plans are the one you make at the last second!

Last night I took an early-evening run through the city, on a path that I didn’t map out, didn’t know how long it would be and didn’t time myself. It was such a breath of fresh air from my usual patter of running from point A to point B, not to mention the run flew by because I was constantly turning corners, weaving through people and avoiding cars shooting through alleyways. I ended up running 4.69 miles. Anyone who knows my running style knows I usually hate those kind of numbers but I just stopped when I arrived home and called it a day. This run was a metaphor for how I hope these next few months will be, and if that run was any indication of the future, letting go of control will be just fine.

And this morning I’m headed to work wearing my compression sleeves under my jeans. Can you tell? 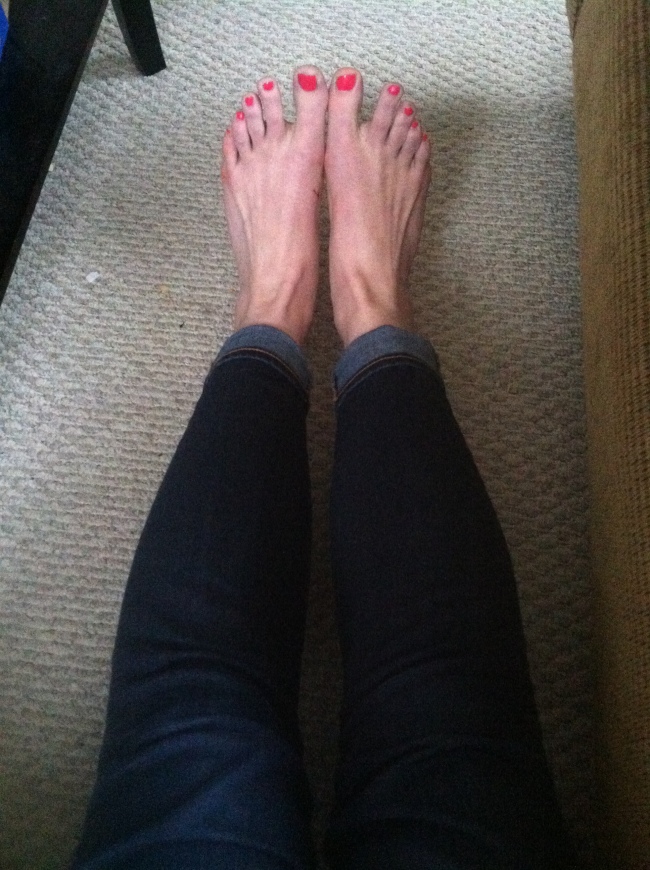 Ahhh the ultimate runner’s ruse 🙂 You’re welcome for that shot of my big, boney feet