It’s a pretty bold move to name a restaurant after one of  your menu items. Can you imagine if the streets were lined with WIENER SCHNITZELs or CAESAR SALADs? You’d go in pretty much expecting the best damn schnitzel or salads of your life, right? That’s why it was so exciting for me to finally try Honey Butter Fried Chicken, a joint situated on a sharp corner smack dab in the middle of Avondale.

I took my dad there this past weekend for a late lunch and after snagging some free parking out front (a rarity in Chicago) we were inside and ready to feast.

HBFC is counter service so they don’t take reservations. I can only imagine the fights that happen when finding seating during peak hours, because even at 3:30 on a Saturday afternoon the dining room was nearly full. We had both already looked at the menu online (like father like daughter) and were both set on our meal choices: The OG sandwich for me + the four piece meal for him. We also grabbed a few sides, of course, because we’re not savages: cornbread and mashed potatoes+gravy. I also got a diet coke for the first time in god knows how long because clearly this was a diet kind of day.

We took our seats and looked at the menu again, almost silently debating if we’d consider getting more meals to go. They have so many options at HBFC that I was having serious food FOMO about potentially missing out on other deliciousness. Thankfully our food was out in less than ten minutes and we were off.

Let’s just get this right out in the open. The fried chicken with their signature honey butter slathered on top of it is better than Christmas morning meets your first frat party meets the day you got your driver’s license meets your wedding day (something I have yet to experience but I promise this was better). It was so many descriptive words that I’ll just leave it at that so I don’t drown in a sea of my own hyperboles. The chicken came out piping hot and fresh (they use local, antibiotic-free chicken) with crispy-as-sin skin and juicy meat. The honey butter melted on top of it like a symphony of sweet+salty flavor and we just kept looking at each other in disbelief for how freaking stellar it was. 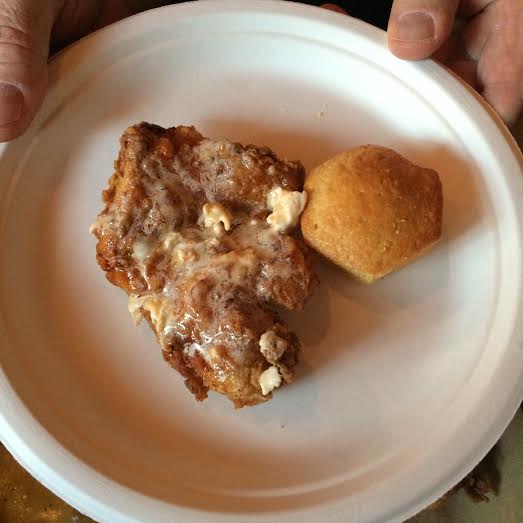 Honestly — you could put that honey butter on a gas station bathroom doorknob and it would be an outstanding culinary experience.

Next up was the OG sandwich: fried chicken strips, candied jalapeno mayo and crunchy slaw. I’m pretty sure the slaw was pickled vegetables which isn’t my jam normally but after taking some of it off to make the punch less packed, this was a bomb sandwich. Plus it was very photogenic which is really what it’s all about, right? 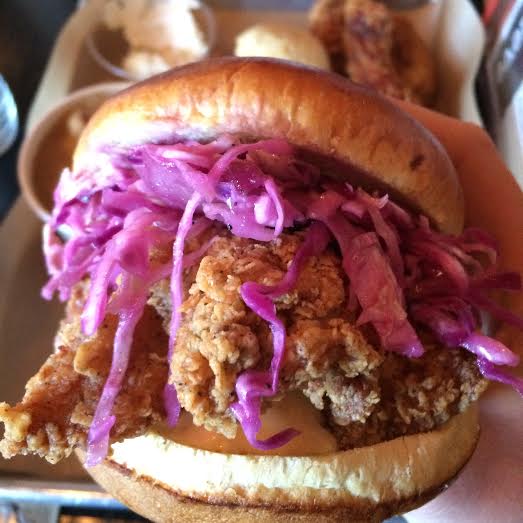 The whole meal was as close to perfection as it gets, and we even sat back and reflected for a few minutes after we were done. The vibe there is like a hipster Buffalo Wild Wings, with the addition of cool artwork and awesome sunlight that comes from being on such a prominent street corner.

To sum it all up, the people are cool, the chicken is fab, the place itself is eclectic without sacrificing class and cleanliness, and I am one day further from being a supermodel. Everyone seemed genuinely happy to be there, from the patrons to the employees. I instantly felt part of some kind of “club,” one that doesn’t think twice about combining honey, butter, and fried chicken (and why would they? It’s genius!)

HBFC is closed on Monday and Tuesday (understandably to give those poor chickens a break) but every other day they stay open until 9 or 10 pm, leaving no excuse for anyone not to try it. They accept cash and credit but not reservations. Walk in, order, and fight for a seat Hunger Games-style. Check out their menu or Instagram and get in there if you can!

PS I just found out they deliver and are also hiring. To say I’m overstimulated and overwhelmed with the beauty of life right now is an understatement.