Well guys, I woke up on the wrong side of the bed.

I’m alllll about positivity and seeing the “glass half full,” but….

Remember exactly seven days ago when it hit 71 degrees and I was out and about running in a tshirt and crops?

I woke up to this:

I seriously woke up and had to check my phone to make sure it really is still March 23rd and, no, I’m not living in some nightmare where we’ve gone back in time to put up with the horrible weather we got here in February. Unbelievable.

Since I’m already complaining, let’s just get a few more things out there and then we can move on to the good stuff. It’s therapeutic, you know?

I sliced my heel open over the weekend, making running and walking pretty painful. I stayed off of it on Sunday and didn’t try to run but I’m so frustrated — between this and the weather I’m pretty sure the big guy doesn’t want me to finish these 100 miles. But I’m determined to prevail, even if I have to spend March 31st running five mile increments all day haha. I would include the gruesome Snapchat that I sent all my friends of my bleeding heel but I know most of you are eating breakfast so I’ll spare ya 😉

I love when PR people reach out to me. I really do! I feel honored and like I’ve somehow “made it” if someone thinks I’m important enough to trust me with their product and think other people will be influenced by my opinion. But dear god, know your audience. I used to WORK in PR, so I know a generic email when I see one, and I can tell when you actually have no idea who I am. Great example? No, I won’t test out a pair of glasses for you. I DON’T WEAR GLASSES. Has anyone, ever, in the history of IHABL, seen me wearing glasses?

I tried one of the most famous hole-in-the-wall Greek restaurants in Chicago this weekend and it was oh so good. I won’t get the salad next time (because the pita and chicken were killer) but otherwise, loved it. The Greek woman running the front of house was just as terrifying and charming as you’d expect (what, having to run a restaurant full of men), and after a little chatting I invited her out for drinks with us next door afterwards. She said she’d love to but she “might never come back.” Idk if I had unlimited access to Greek fries I’d probably never leave, so….

Luckily I got some great running in pre-heel hack incident. In fact, I set a new personal best for “miles run without actually being in a race” haha. 8.68! And I felt like I could keep going (minus the fact that my legs felt like lead blocks by the end).

I’ve become pretty obsessed with running outside so this whole snow thing is really throwing a monkey wrench into my week. I even came up with a great 8-mile loop around the city so let’s just hope this snow melts in three hours. That’s possible, right?

Saturday night I went out with some girlfriends from work, and we unknowingly all dressed like cowgirls. When you go out with girls from lululemon and not a single person wears leggings, it has to be documented.

But actually. Once you get to wear leggings to work every single day, putting on pants with a button in the front is a mild form of torture.

In other news, I was finally able to try out Amanda’s Banana Oat Greek Yogurt muffins and I’m a fan. I didn’t blend the oats but they still turned out so well and are the perfect sweet treat to have on hand. I LOVE sneaking Greek yogurt into dishes because it ups the chance that I won’t be hungry 30 minutes later by at least 50%. 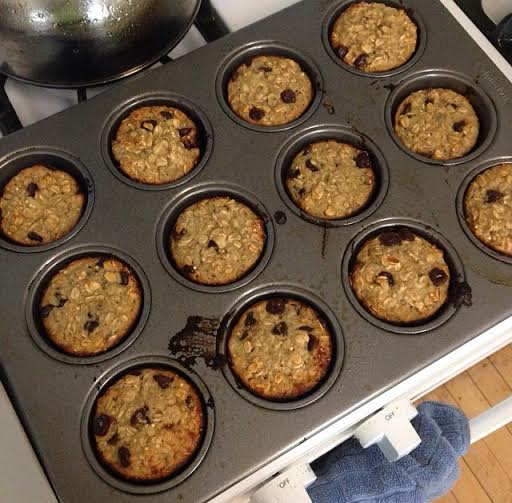 Finally, I rounded out my Sunday night post-work with some tacos. I was lucky to be in good company with Bethany and Erin. Blogger get-togethers are  some of my favorite things to do because who else can you talk with about running, food, and blogging etiquette for over an hour? None of my friends would put up with that nonsense!