Since I had to work all weekend Zain and I decided to celebrate Valentine’s Day last night. We already exchanged goodies on Friday (chocolate, candy, stuff like that) but last night we went out for a fancy romantic dinner.

After work we got dressed up and headed over to Lincoln Park to Geja’s! I’ve heard nothing but good things about this fondue spot but had never tried it for myself. I’ve only ever had the Melting Pot which I remember being wayyyy too expensive, so I was excited to try a similar restaurant with a more intimate environment.

Before leaving the apartment we got all spiffy and cleaned up.

We grabbed a cab and within ten minutes we were in Lincoln Park.

This quaint little restaurant is located semi-underground, adding to its romantic vibe. You’ll have to excuse the photos from the dinner—it was the darkest restaurant I’ve ever been to! Romantic, yes, but a blogger’s worst nightmare!

We were seated immediately in a booth tucked away in the corner with a white linen tablecloth and a bright orange French fondue pot. Since it was a celebration I knew I needed champagne so first things first, that’s what I ordered!

We decided to go with the fondue meal, complete with salad, cheese fondue, meat, and chocolate fondue at the end. It was about $45 person depending on what you picked. Zain went with boneless chicken breast (so proud of him for trying to eat less red meat) and I went with the seafood deluxe (obviously more expensive).

First came the salads, simply dressed with Dijon vinaigrette. It was nothing out of this world but I love starting with a salad no matter what the meal is so I was happy.

The best fondue hands down was the cheese. Sweet lord almighty it was so good. It was a mix of gruyere cheese, sherry, nutmeg and other spices, and served alongside pretzel bread, apple slices, and grapes. Surprisingly the star of the show was the apples and cheese. They paired perfectly together!

Next we had our main courses. One wonderful thing about Geja’s is that if you ask they’ll let you cook your meat of choice in a pot of broth instead of oil, which I did. It was one of those healthy choices that really doesn’t take much effort at all. Don’t you love it when it’s that easy? After all, I was more interested in eating my body weight in the cheese and chocolate.  The way in which my seafood was cooked didn’t matter much to me at all.

I chose the lobster tail/seafood combo. The meats were served together on a giant platter along with close to a dozen different sauces. Zain and I loved our main courses and were especially happy with the garlic butter dipping sauce. I doused every piece of seafood in lemon and garlic butter and each bite was heavenly.

Finally, out came dessert.  I was convinced (easily) to get a frangelico cappuccino along with our chocolate fondue (nice $11 addition, waiter. Well played.)

The chocolate fondue was served with bananas, strawberries, rice krispies, pound cake, marshmallows, graham cracker crumbs, pineapple, and cherries. Zain gave up about halfway through but I’m proud to say I persevered and came close to cleaning the plate. It was so so so delicious. 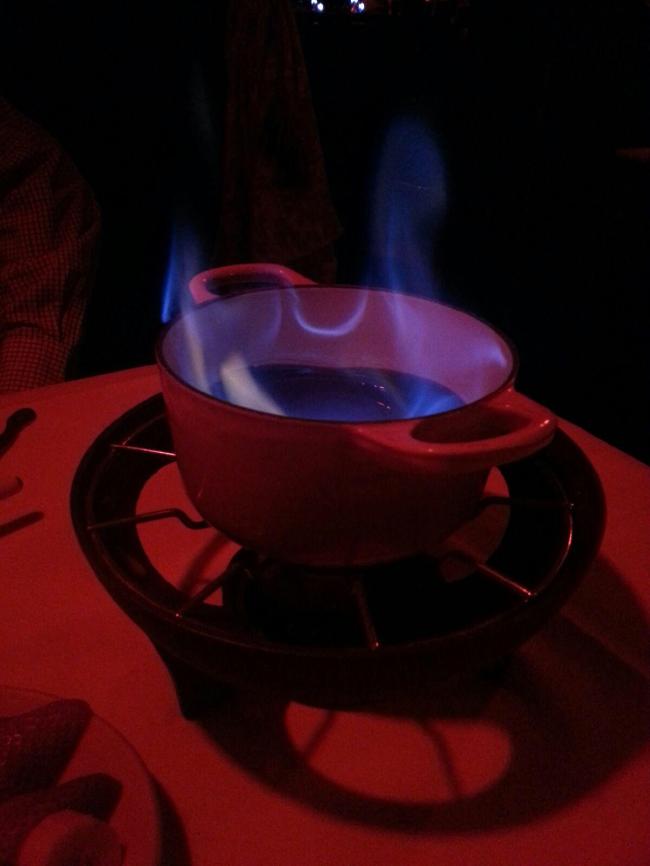 My overall thoughts of Geja’s? It was hands down one of the most romantic restaurants I’ve ever been to. It’s definitely a place to go for an anniversary or Valentine’s Day. The portions appear small at first, but I left feeling perfectly full, not stuffed. I appreciated that they forced me to pace myself with the cheese, because trust me, if that pot had been full I would have easily finished it. I would love to come back just for the cheese and chocolate, as those were my favorites. While the meat was delicious as well, I’m not always looking to spend $50 on one meal. The only con I have for Geja’s is the smell! I know it’s unavoidable but the restaurant smells like cooking oil (obviously) and when you leave your clothes reek of the stuff. Nothing a little laundry time won’t fix but the smell was definitely overpowering.  Overall, it was a wonderful Valentine’s Day. The best part was that my handsome date went out of his way to be a total gentleman all night. After dating for over three years it was adorable to see him act like it was our first date all over again. It was a perfect night.

What’s the most romantic restaurant you’ve ever been to?