To say that this weekend was eventful would be an understatement.  Zman’s grandma hasn’t been doing well so we flew to Dallas on Friday night to spend a few days with his family.  While we did a lot of our usual Texas activities (hello, bbq), the weekend had somber undertones.  That, combined with the Dallas Cowboys first home game of the season on Sunday night, and it was a pretty eventful weekend!

We were originally planning on being in Dallas to celebrate Zman’s brother’s engagement! So while we spent some time at the hospital, most of the weekend was spent with his brother and fiancee!  It was so much fun.

Friday night we got to O’Hare airport early enough to grab a quick dinner before our flight.  There are a million options at O’Hare but we settled on Goose Island Brewery. 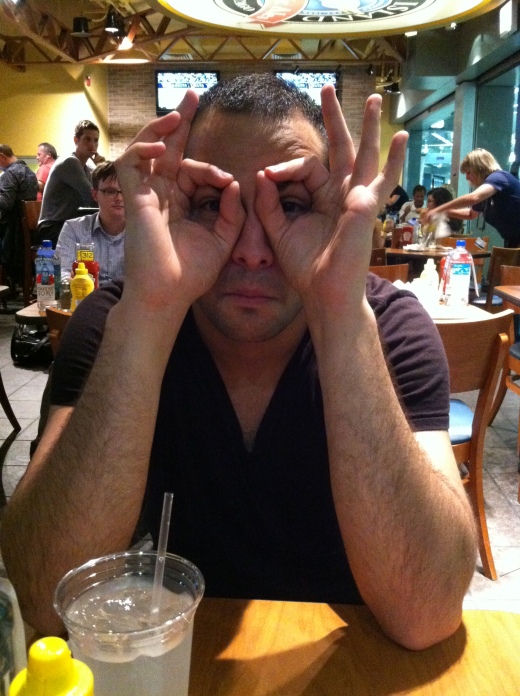 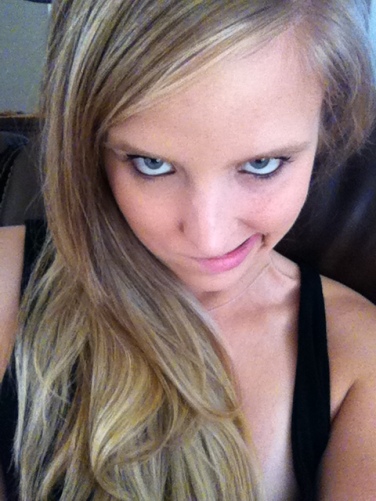 I got the grilled chicken sandwich with a side of fries. I loved this sandwich! It was on wheat bread and I could tell it wasn’t slathered in butter like most sandwiches are.  It was actually a double-decker sandwich so I took the middle layer of bread out to cut back on the excess.  Then I ate the fries and everything was even 🙂 All about the balance, people.

Of course since we were in Dallas one of the first thing Zman wanted to do was get Dickey’s Barbeque.  Saturday afternoon was full of mac and cheese, brisket, bbq sauce, rolls, and waffle fries.  It was a doozy.  I knew I wasn’t going to be getting much of a workout in for the weekend, however, so I separately ordered a bbq grilled chicken sandwich and heated up some green beans that I found in their freezer. Sometimes you’ve just got to be that weird person who healthifies their meal! It was tough because their mac n cheese is to die for! 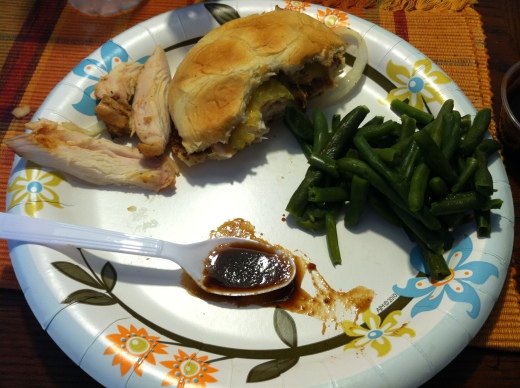 Later that night we went out for a celebratory dinner at Maggiano’s for the engagement!

This was the most upscale Maggiano’s I’ve ever been to.  It looked like a casino!  Minus a few hiccups thanks to a snarky waitress and a group of 15 that was hard to control (haha) it was a deeeelicious spread. Did you know that when you order a dish from Maggiano’s they give you another one to-go? What is this madness? I mean I’m all for free food, but why, America? I’m not a big fan of Italian food but when I do get it, I almost always get eggplant parmesean. It’s one of my all-time favorites

After dinner the rest of the group wanted to go out but Zman and I decided to head back to the house and watch a movie.  Around midnight I wanted ice cream and stumbled upon some mint chocolate chip in the freezer.  I saw a box of cake cones in the pantry as well and was excited because I love putting my ice cream in cones!  Hysterically, the cones were “kid cones” and probably only held half a scoop of ice cream at the most. It was so funny–talk about portion control!

Zman and his brother rocking our purses in the hospital:

The stereotype about Texas is true: they live and breath Cowboy football.  Wherever we went (including the hospital) people were wearing their Romo jerseys and talking about football statistics. I’m a football person but let me tell you, there’s a difference between love and OBSESSION. Still trying to pull Zman from the dark side of obsession but I guess that’s one thing I have to accept 😉

It was a fun night watching the game at Zman’s house. His family created a makeshift theater in an empty room upstairs using a projector and a few LazyBoy chairs, so we made popcorn, ate candy, and cheered for the Cowboys (who won, by the way!)

This morning was horrible.  We had an early flight at 6am so we were out the door by 4am.  Normally I’m a early bird, but this excessive wake-up call made me extremely nauseous. I spent half the flight not speaking to Zman for fear of projectile vomiting and the other half making him be my personal pillow. Boyfriends are the best.

I spent the day working from home and then going to a shift at the restaurant, followed by an hour-long cardio session at the gym. It’s been a long day!  Can’t wait for things to settle down tomorrow!

Question: Do you ever “healthify” foods when you’re with a big group of people even if it makes you stick out like a sore thumb?