I think it’s safe to say that every diet-friendly cookbook idea known to man has been written. Just looking at Amazon I saw “Thug Cookbook”, “The Disney Princess Cookbook”, “Giada’s Feel Good Food” and “Simply Skinny.” There are so many cookbooks out there claiming to have a variety of recipes that will make you feel your best and will be super easy to cook and cheap to buy. But in my humble opinion there are only two words you need to know to eat well, eat fast and eat cheap.

I mean really. So many veggies. So many whole food options. So many spices. And they respect the power of guac and cheese, which I can always get on board with.

I plan on moving out of my parents’ house sometime in the next month (fingers crossed!) and I know between rent, the cost of living in downtown Chicago, and my admitted love of Trader Joe’s and fitness studios it’s going to be a tight squeeze on my wallet. And since I’ve never been a huge pasta person I need a cheap go-to option.

Mexican food can be the healthiest food or the most unhealthy choice. Why yes, I do love me some nachos and a margarita the size of a small child. But I also love burrito bowls, shrimp fajitas and would swim in a pool of black beans. All wonderfully healthy options. Not to mention that when I’m making Mexican food I’m almost always downing it in red pepper flakes, an addition that has been proven to shake up your metabolism. Which is a healthy living tip I’ve always taken extremely seriously because my metabolism might be kicking now but if my love of food doesn’t die down sometime in the next decade there might be troubled waters ahead.

So now that the move-out date is approaching, I’ve started my experiments. And since I’ve been in the midst of a desperate attempt to veggiefy my life, I threw the contents of my fridge into a cast iron skillet and hoped for the best. My prayers were answered and I was left with a kick ass fritatta. 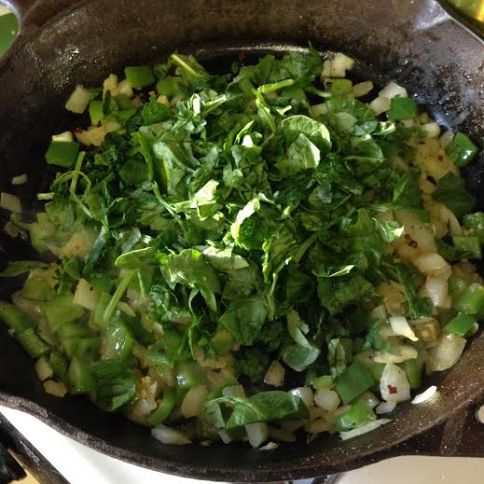 South of the Border Frittata