I had a great time this weekend! So much so that the thought of whipping out the computer to blog just seemed irreverent 🙂

So here I am, another Monday is here, and the one thing getting me through it is reminiscing about my fun Saturday.

It all started bright and early with the official opening celebration of my local bootcamp!

I woke up earlier than normal because it was beautiful fall weather and I wanted to bike there. 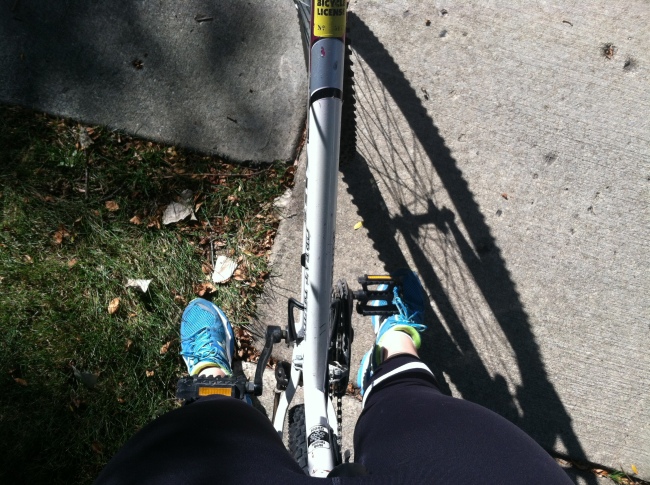 Biking in Fall weather is amazing. It was sunny but crisp and I biked the three miles or so through town and to bootcamp.

It was my first partner workout! I was paired with a middle aged woman and she was just the sweetest! That’s what I love about Crossfit-like workouts…anyone with any skill level can work together and as long as you know your limits and how to modify the workout, it doesn’t matter.  I love working with people and motivating them to kick their own butt! It was a fun class full of running and rowing.  The ring rows were the toughest for me because my upper body strength is definitely lacking.

After I biked home I walked into the house to a great surprise: whole wheat french toast!

I grabbed two slices, drowned them in maple syrup, and served them alongside two eggs.  If I don’t eat some protein with breakfast I’ll be hungry ten minutes later so eggs were definitely necessary.  It was such a nice change-up from my normal breakfasts! 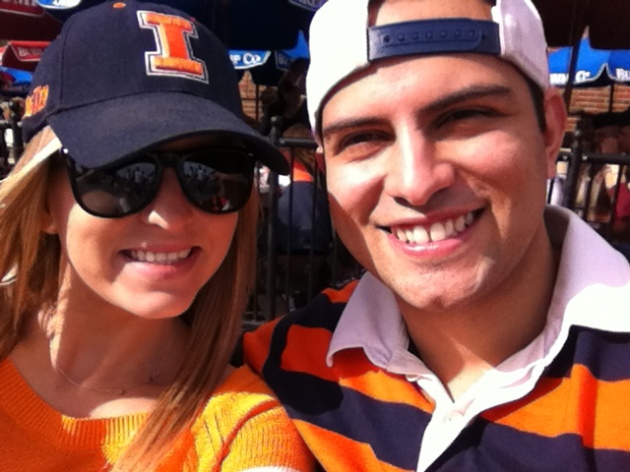 We ate outside on the patio of Bubba Gump Shrimp. It was the perfect way to enjoy the beautiful weather. 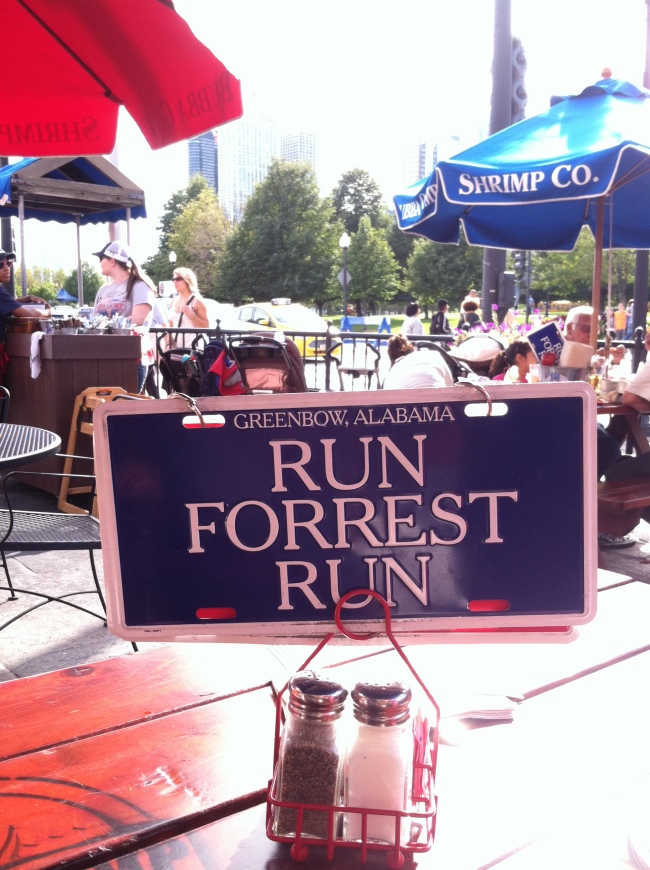 If you’re even at Navy Pier I highly recommend Bubba Gump. It was fairly inexpensive and pretty delicious, but the highlight of the meal was our waiter.  He asked us trivia about the movie Forrest Gump throughout our meal which made it a really lighthearted and interactive experience. I was so impressed because Zman knew EVERY answer! He’s a real movie buff, apparently. Who knew 🙂

We started out with a popcorn shrimp appetizer (mostly because Zman was ready to eat his arm if he didn’t get food asap). I was so happy because he usually refuses to touch any kind of seafood but today hunger overruled!

Zman is also a sucker for fruity drinks so when he saw the waiter walk by with some of the famous Bubba Gump cocktails he knew we had to try one.

I tried some and that thing is dangerous! So sweet that you wouldn’t even realize what you’re drinking 😉

For my entree I ordered a berry and shrimp salad, which came out beautifully.

It was so light and refreshing, the perfect balance after attacking that popcorn shrimp!

After our mini-date, we walked from Navy Pier to Soldier Field (another 3 miles!) and found our seats for the game.

The best thing about Soldier Field is that there isn’t a bad seat in the house. It’s a relatively small stadium, so even from the 400-level we could see every play.

It was a good game! We definitely have low expectations for our football team haha so the fact that we kept up and made it a good game was great for the fans.  I didn’t even mind the loss because I ran into one of my oldest and dearest friends from high school, Frank! I love it when that happens.

Once the game was over we walked with masses the Museum of Science and Industry, where most people were drunkenly stumbling onto buses and into cabs.  Luckily, Zman is a fan of walking so we decided another three mile walk would be better than waiting for that mess.

I love Chicago. Have I made that clear yet?

After getting back to the apartment and watching The League while we recuperated, we had some friends over and decided to go to Wrigleyville for a bit.  Even though we didn’t spend a lot of time at the bars, it’s always good to get out to that area. The people watching, ESPECIALLY after midnight, is hilarious! No pictures from the bars but I obviously did document the most important part of the night:

No night out is complete without a 2am pizza run!

It was a blast of a day! It felt a little like we were back in college, which I’ll never say no to 😉

Question: what’s your favorite late-night food after you’ve gone out?

Just a few things that I’m loving this week! TGIF 🙂

Fall is the time of year I start to gravitate towards more indie/alternative music instead of the country tunes that take up 100% of my time throughout the summer. Autumn and indie just seem to go together beautifully

But there is always room for a guilty pleasure, bubblegum pop song obsession

In breaking news, this cereal is heaven. Also, it only has 8 grams of sugar per serving? How is that even possible? That’s less than the twigs and branches cereal from Kashi that I usually eat. Actually I take that question back. Not gonna question it.

god I am LOVING DC-related shows. First “House of Cards” and now “Scandal”. I know I’m a few years late to the party (what else is new) but this show is great!

“11 Life Hacks for the Emotionally Struggling 20-something”

“If you can’t enjoy what you have now, you are not in the right mindset to enjoy anything else”

It’s VERY hard to enjoy your day to day life when you feel like you aren’t moving in a certain direction. For me, I have always been used to moving forward–going to high school, making varsity basketball, taking the ACT, getting into college, picking a major, getting my degree.  There’s always been something new to achieve, fairly easily too as long as I wanted it to happen.

Nowadays, life is more of a mystery. I have no idea where I’ll be one year from now. Many people my age have the same problem. But I’d be a fool to not enjoy what I have now because I feel like “less of a person” without a plan. I have parents who love me and give me a place to live, a boyfriend who would support me no matter what I chose to do or where I chose to go, and a genuine group of friends who I can always have a good time with. That’s enough for now.  Even though I occasionally have to have an awkward minute-long conversation with people who ask “what are you doing with your life?”, that’s okay.

I just made some pre-Fall purchases that I couldn’t be happier with.

Fall fashion is the best.

The U of I game this weekend!

My alum mater is playing football tomorrow at Soldier Field in Chicago! I’ll be heading downtown after getting a quick workout in so I can enjoy the first brisk day of fall tailgating and watching the game. I’m so excited!

In other news, happy Friday the 13th! Can you believe we’re basically halfway to October?!

Question: what are you loving currently?