Saturday’s 5k celebration wrapped up my volunteer season with Girls On The Run. It’s the culmination of all the girls’ hard work throughout the season.

I woke up bright and early Saturday morning to take the L to Millennium Park — bright and early being 5:30am. It was a brutal time to hear that alarm going off but luckily I hopped out of bed and was ready in just a few minutes. As a coach I had to be at the site at 7am to check in the girls, their running buddies, and pick up the girls’ bibs and running packets. Of course, seeing as it was dawn I had one important stop to make beforehand:

recycled photo but you get the idea

It was a Venti kind of morning.

I arrived at the site just after 7am thanks to CTA delays (you know what I’m talking about Bethany). My assistant coach had already picked up the packets so I headed over to our meeting spot to get the girls all set up, bibs on, and stretching.

My favorite part about the 5k was the parents’ involvement. The girls aren’t allowed to run alone, so they have running buddies who complete the race with them. Every single girl had either one parent or a few family members show up to run with them. It was funny because I hadn’t heard from a single parent the entire 12-week season so I got to meet a lot of them this weekend for the first time. Nothing like saying “Hi, nice to meet you! You’re welcome for babysitting your daughter for the past three months! ” I kid but not really…

Everyone was pretty apprehensive before the race. The forecast called for thunderstorms and wind so we were all on edge throughout the morning. Luckily we were in corral A so the girls were off right at 8am and done by 9. I wanted to do cartwheels of joy when I realized that as my girls were wrapping up their 5k some of the other groups hadn’t even started.

We did a bit of dynamic stretching (most of which included the girls rolling down a hill…I am not meant to be a teacher…zero discipline happening over here), got the girls’ bibs pinned on, took some mother/daughter pictures, and headed to the starting line. With Selena Gomez blaring over the speakers, the girls were off just before 8am. Everything ran so smoothly!

The other coach and I went down to the finish line to wait for our girls to arrive.

There was a bit of rain but nothing compared to what happened later in the day so we really avoided the worst of it! As the girls ran past us with their running buddies I got more emotional than I thought I would — it was so wonderful to see them push so hard at the finish. I honestly didn’t realize how much I loved those girls until the very end when I saw them pushing to finish the 5k! I teared up thinking about how great the girls are — so confident, goofy, independent, and strong, and I had a great sense of pride being a part of Girls On The Run. As a woman who grew up in this crazy society myself, I know how hard it can be to hold on to those unique parts of yourself in a world that tells you to be more normal, quieter, smaller, and less expressive, while also making you question your worth based on impossible physical standards. These girls are too young to be affected by most of that but soon enough it will happen. And I’m just so hopeful that their involvement with Girls On The Run will make them stronger to fight it. GOTR is all about learning how to be strong and healthy, physically, while also teaching them values about friendship, self-confidence, and kindness. And even if they didn’t take much away from the season, I hope that I had a small part in helping them grow stronger.

I felt like a proud mama bear at the end of the race and insisted on tons of pictures with all the girls. Now I know why moms do that! 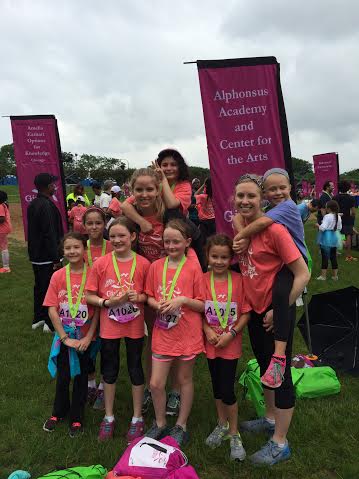 The girls grabbed their medals, bananas, and water and just like that, the season was over. I have to admit it was weird to just have the families walk away afterwards. I felt like I wasn’t getting any closure on a program that I volunteered for for 12 weeks. But I guess that’s what they say — you have to give without expectation. That’s the point of volunteering, right?

When I moved to the city, I knew I wanted to be a volunteer. I wasn’t sure how, but I’m so happy that I decided to volunteer for GOTR. It taught me so much, including the fact that I am not born to be a teacher! I have a new-found respect for teachers — just three hours a week was exhausting.

So — will I work with the program next year? Yes. Will I be a head coach? No. I was unfortunately placed at a site where the Site Coordinator, aka the person at the school who was supposed to be my main form of contact and connection to the school, was completely MIA the entire season. There were multiple days when I prepared a lesson, showed up, and there was no school so no one was there. There was no communication about how to get the girls their after school snacks, where we were supposed to run, how to enter/exit the school, who to talk to to set up our bake sale, etc. For all the school knew I was just some stranger who roamed their hallways on Monday and Thursday afternoons. That being said, towards the end of the year things got exponentially better as one of the moms came to every practice and took charge. She organized the bake sale and end-of-the-year party and communicated with the principal about our program and plans. I really couldn’t have done it without her. I’m happy that I was a head coach this season, but for net year I will definitely stick with the assistant coach role, and I will definitely make sure to lay of my expectations for what the site coordinator’s responsibilities are at the beginning of the season.

If you’re interested in volunteering for Girls On The Run for their fall season, give it a try! I highly recommend working as an assistant coach — in that role you only have to commit one day a week for 90 minutes. As a head coach you are required to volunteer twice a week for three hours, not including lesson planning, so just consider what you can handle.

At the end of the day, GOTR is a non-profit, and as we all know, non-profits are disorganized. But I wouldn’t trade my experience for anything, despite the challenges. Because overall, I got to hang with some pretty cool third graders for 12 weeks and that alone was worth it.